Difference between revisions of "Category:Documentation Cluster" 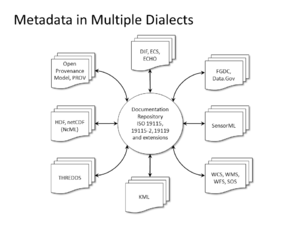 “We dissect nature along lines laid down by our native language. Language is not simply a reporting device for experience but a defining framework for it.” Benjamin Lee Whorf

A dialect is a "variety of a language that is a characteristic of a particular group". In the context of data sharing in ESIP, the ways that different groups document their data and products (i.e. metadata standards) are great examples of dialects. They are varieties of the over-arching language of documentation that are used by particular groups in ESIP and other partners in the global environmental community. Figure 1 illustrates this idea with a few commonly used dialects.

The ESIP Community is made up of scientists and informatics experts from a wide variety of disciplines and backgrounds. They come together at ESIP because they realize that they share common needs and hope that they can find others that can help them address those needs. For example, many ESIP members make observations and process them into datasets and products or run models that "predict" data in the past, present, or future. We all want to share those products with a variety of users and, more importantly, we want to make sure those users can discover, use, and understand those products.

The Documentation Cluster is an evolution of the original CF Cluster that was started by Rob Raskin and focused on the Climate-Forecast Conventions that are: commonly used by netCDF and related tools. The CF Conventions are an important metadata dialect used by a number of ESIP members and their partners. The Documentation Cluster helps us keep in mind that the CF Conventions are only one of many dialects used by different ESIP groups.

This category has the following 6 subcategories, out of 6 total.

The following 29 pages are in this category, out of 29 total.

This category contains only the following file.