EPA/RPO Monitoring/Data Analysis: this is from an article in August 7 Science

If anyone wants the original Science Mag research article, let me know.

.. and the pattern of isoprene emissions inferred from satellite observations of formaldehyde is here.

…and which looks sort of like the pattern of upwind average (Donna Kenski method) aerosol OC from multiple IMPROVE and STN sites that you calculated and included as an illustration of an earlier version of the CATT users manual. When the data were constrained to only the highest percentile concentrations, the forest fire locations stood out, but looking at lower percentiles or average values, the southeast region (of apparently highest biogenic emissions) stands out. Could this be isoprene-related aerosol? 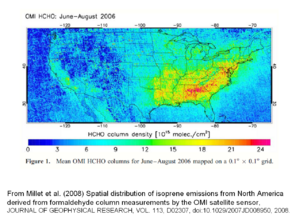 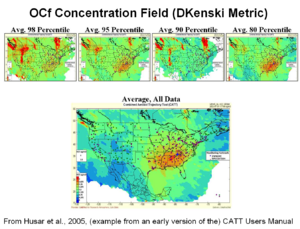 Earth Observatory image of the day on ozone precursors in the U.S -- Clynnes 12 August 2009 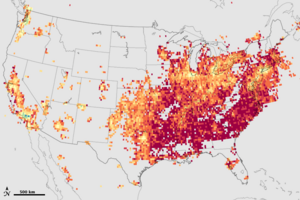 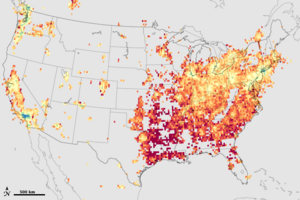 Re: Earth Observatory image of the day on ozone precursors in the U.S -- Rhusar 12 August 2009

Well, there is a bit more to the ozone formation than the Formaldehyde/NO2 ratio. Formaldehyde is just one of the organic reaction products, mostly from isoprene emission by trees. Most organics in the Eastern US are urban/industrial. Still, the CH2O/NO2 ratio is useful for the study of ozone from natural emissions.

Re: Re: Earth Observatory image of the day on ozone precursors in the U.S -- RScheffe 12 August 2009

I made a similar comment to Ernie H. when he presented this information at the ESIP meeting. But it really is good information and pretty insightful. The beauty of it is the availability of consistent data to construct the images.

Rich, indeed, how nice it would be if these satellite products (gases and aerosols) would be analyzed by a full array of experts ...from multiple perspectives. .. and then combining the wisdom.

Retrieved from "https://wiki.esipfed.org/w/index.php?title=Talk:Discussion_on_Natural_Organics_over_North_America&oldid=23557"
This page was last edited on October 7, 2009, at 08:45.
Content is available under GNU Free Documentation License 1.2 unless otherwise noted.
Privacy policy
About Federation of Earth Science Information Partners
Disclaimers