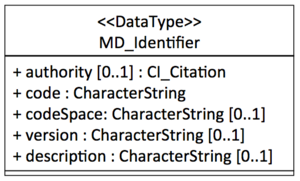 Including metadataIdentifiers in the ISO metadata records gives metadata creators a mechanism for uniquely identifying them. This is becoming more important as metadata records evolve from single files into collections of related objects that can be harvested into repositories like geo.data.gov along multiple paths. There is no reliable way to identify duplicate records without a unique identifier in the actual record.

Digital Object Identifiers are most commonly used to identify and cite published datasets. In the ISO standard these identifiers should be included as an MD_Identifier in the CI_Citation for the dataset. This citation describes how the dataset that the metadata describes is to be cited. If the metadata record itself also had a DOI, that would be in the fileIdentifier.

As DOIs become more ubiquitous, the prefix doi: is becoming a standard internet protocol. This means that browsers and other tools will know that the string doi:10.5067/MEASURES/DMSP-F8/SSMI/DATA302 means the same thing as the URL: http://dx.doi.org/10.5067/MEASURES/DMSP-F8/SSMI/DATA302. As this becomes more common, it addresses the problem of identifiers with no straightforward mechanism for resolution.

Managing ISO Metadata in a Database

Including identifiers in ISO metadata records gives metadata creators a mechanism for uniquely identifying metadata records and pieces of those records for the first time. The importance of unique identifiers is well known to people that use relational database management systems, they are the primary keys that identify items and make relationships possible. This is also becoming more important as metadata records are harvested into repositories like Geospatial One-Stop along multiple paths. There is no reliable way to identify duplicate records without an identifier in the actual record.

The REST approach to web services is becoming more and more commonplace. The first principle of REST is “Give Everything an ID”. Given this principle, one measure of how “RESTful” a metadata standard might be is the number of id’s that are included in the standard. This compares the number of IDs included in four metadata standards. The original FGDC standard has none, the Directory Interchange Format (DIF) and the FGDC Remote Sensing Extensions (RSE) have one and the ISO 19115(-2) has 36.

These ids make it possible to reference many individual elements in an ISO metadata record directly, so the ISO standard is very compatible with a RESTful approach.