Determine whether or not my OpenSearch service or casts are compliant with some version of the ESIP discovery protocol.

I, someone whose organization is trying to develop an OpenSearch server or cast generator that wishes to be compliant with some version of the ESIP discovery protocols, use the ESIP testbed to test whether or not my service or cast actually is compliant.

The ESIP testbed portal is up and running and has been configured to accept a range of ESIP specifications that it can validate against. There is a publicly accessible URL for the service or cast to be validated.

This use case is triggered when the user decides to activate it by going to the ESIP testbed portal and selecting one of the options for validating OpenSearch servers or cast endpoints.

After validation, the user will know whether or not their cast or OpenSearch service is ESIP compliant and if not, exactly what the problem is

OK - so no diagram so far. Is one needed for this use case?

Out of the box, the Esri Geoportal Server provides a mechanism for validating XML documents against a requisite XML schema. The Geoportal can also validate against an XSD or Schematron document.

The Esri Geoportal Server has two interfaces for checking validity. 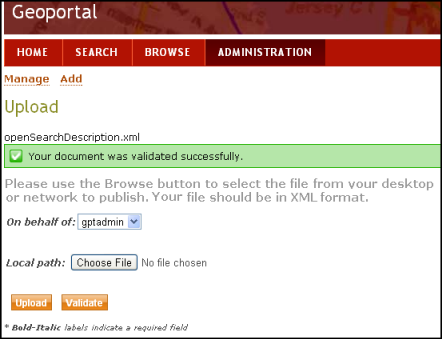 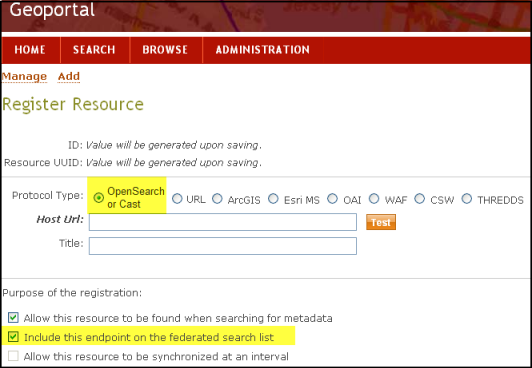 Federated search to these endpoints is described more fully in the Query aggregated data and services use case.

Back to Discovery Testbed Work Plan

Retrieved from "https://wiki.esipfed.org/w/index.php?title=ServiceValidation&oldid=40790"
This page was last edited on September 4, 2012, at 21:49.
Content is available under GNU Free Documentation License 1.2 unless otherwise noted.
Privacy policy
About Federation of Earth Science Information Partners
Disclaimers