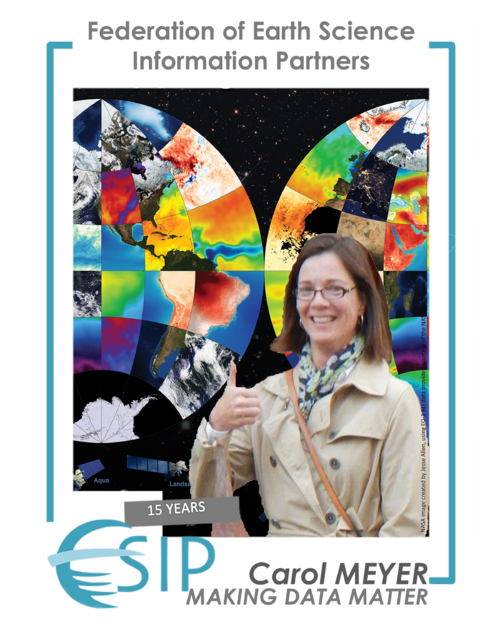 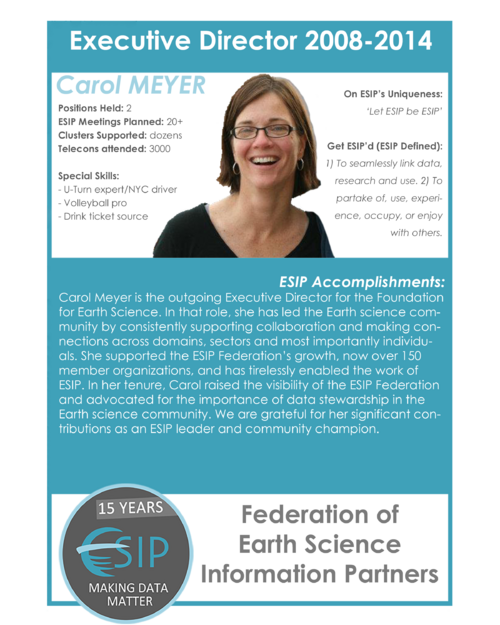 Carol has been with the Foundation Foundation for Earth Science, the secretariat for ESIP, since 2003 and served as the Foundation's Executive Director since 2008. During this time she's championed the ESIP Federation, supported the growth of the ESIP membership to over 150 organizations and has helped raise the visibility and importance of Earth science data and informatics. One of her sayings is 'Let ESIP be ESIP' - this phrase captures the essence of ESIP's community-led nature and because of that flexibility and openness, ESIP has thrived under her watch.

It is ESIP legend that Carol is an expert NYC driver. When the ESIP meeting was at Lamont, Carol drove part of a group fearlessly through NYC to a Yankees' game and drove home in pouring rain. Erin has also been in the car for at least a few u-turns because of their collective challenge navigating.

In her free time for several summers, Carol played rec volleyball. Those skills came in handy at the Santa Barbara ESIP meeting.

Retrieved from "https://wiki.esipfed.org/w/index.php?title=Carol_Meyer_Trading_Card&oldid=46082"
This page was last edited on March 30, 2014, at 15:56.
Content is available under GNU Free Documentation License 1.2 unless otherwise noted.
Privacy policy
About Federation of Earth Science Information Partners
Disclaimers