A Concept Proposal contains necessarily the following information to support the evaluation:

These Concept Proposals are intended as a way to minimize initial efforts of project teams so that only projects of interest will prepare Full Proposals. However, the Concept Proposals need to contain sufficient information to enable the review panels’ evaluation and GEO support to the projects.

CFP supports projects connecting the parts of this diagram to demonstrate societal benefits from Earth observations and GEOSS. 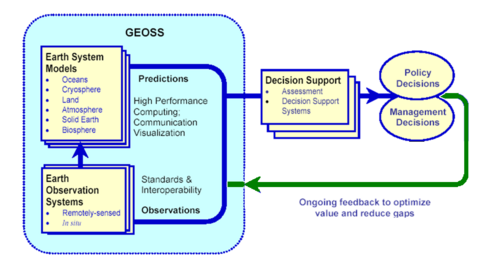 Air quality data is normally created by a data provider for a particular mandated end user. The format of the data is specific to the use and the metadata that describe the data are focused on a certain application. More and more, the GEOSS idea is growing that ‘a single problem requires many datasets and a single dataset can serve many applications’ (Zhao, 2006). In order to access a dataset providers need to be able to publish and users need to be able to find and bind to a dataset of interest. Standardized data access services allow interoperability in binding to a dataset. However, the first two parts of publishing and finding a data access service are still problematic. In particular: (1) How does one describe the data access service so that it can be discovered by users? (2) Where does one publish their data access service so that it can be found?

Figure X. shows the flow of metadata. Starting with the service provider, the GetCapabilities document is used to create an ISO 19115 metadata record for the data access service. The xml document is saved into the community catalog. The community catalog is registered as a component in the GEOSS Component and Service Registry (CSR). The GEOSS Clearinghouses query the GEOSS CSR for catalogs and then harvest the catalogs for their metadata records, ending the metadata publishing process.

Retrieved from "https://wiki.esipfed.org/w/index.php?title=Air_Quality_Information_System_and_GEOSS:_India_Air_Quality_and_CATHALAC_Applications&oldid=20569"
This page was last edited on June 10, 2009, at 04:59.
Content is available under GNU Free Documentation License 1.2 unless otherwise noted.
Privacy policy
About Federation of Earth Science Information Partners
Disclaimers