Workshop Agenda for 5-May-08 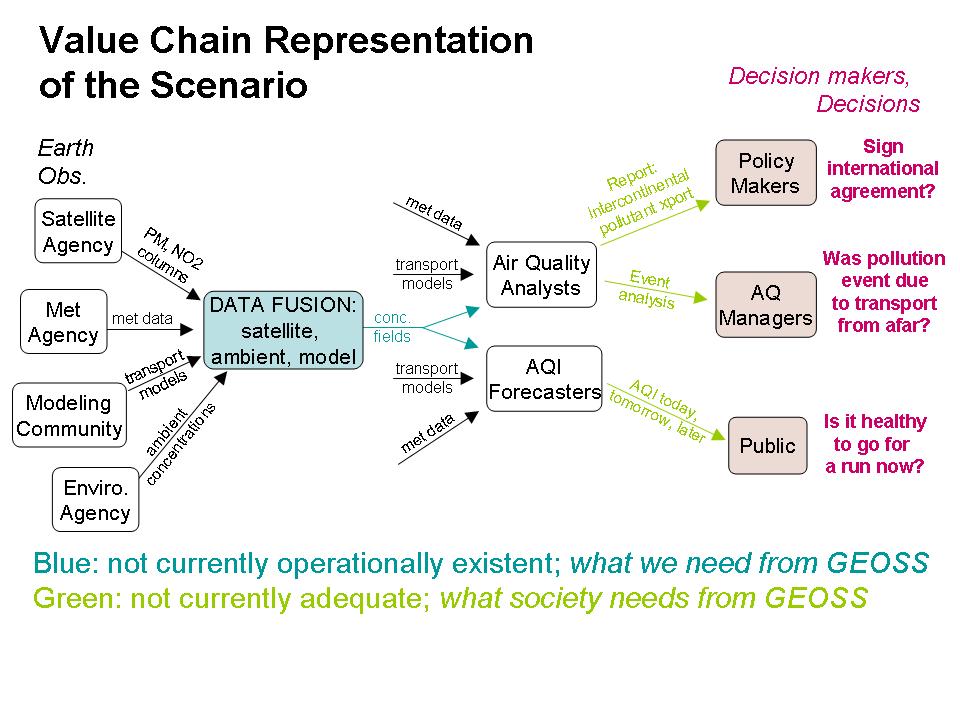 These examples help to make the scenario more concrete. One key is that, several steps upstream in the value chain, these users all depend on the same data, tools, and information.

On 5 May 2008, the day before the GEO UIC meeting, there will be a side meeting on the Architecture Implementation Pilot (AIP) AQ Scenario. From a GEO point of view, this meeting has two primary functions:

The AQ session side session will introduce the AQ scenario to participants from the GEO UIC and ADC. Participants will then be asked to form small groups of actors, role playing the scenarios, to document what users need from the GEOSS registry and standards.

Development of this scenario also builds the AQ Community of Practice.

The air quality scenario is very broad, intentionally pushing the capabilities of GEOSS. It requires interoperability and stability over different time scales and for many different users, e.g.:

This is not a 'demo' but a push for a broad infrastructure.

It is important for us to keep in mind that the AQ scenario is a tool to help GEO participants flesh out GEOSS through the eventual call for participations, etc. As such, it needs to be clear to folks from well outside the AQ community!!

Retrieved from "https://wiki.esipfed.org/w/index.php?title=2008-05-05:_UIC/ADC_Air_Quality_Scenario_Workshop&oldid=15794"
This page was last edited on May 24, 2008, at 21:27.
Content is available under GNU Free Documentation License 1.2 unless otherwise noted.
Privacy policy
About Federation of Earth Science Information Partners
Disclaimers