I’ve tried to capture in a very draft figure (attached) the results of our discussion yesterday. Please feel free to correct/expand the figure as needed and send it back or give me call to clarify what I’ve missed. I’d like to go through an iteration or two before distribution. We do have additional metadata for each of our data sets (not data files). I think this may be what you refer to as access metadata. Are you familiar with GCMD and their DIF metadata content and format? We prepare a version of that when we submit our data sets to the Langley DAAC. It’s on the ftp site too. (St. Louis aethalometer DIF file is not on the ftp site yet.)

We also have our NARSTO data sets (most of them) indexed in a Mercury metadata search tool. http://mercury.ornl.gov/narsto/. (Our metadata editor creates the .xml file that gets harvested and indexed.) If you view a full metadata record, go the very end of the page, you’ll see a “View Metadata Source” link. This links to the metadata .xml file. I was talking with Giri Palanisamy, our resident FGDC and ISO metadata expert, about this activity and he mentioned that a new North American version of ISO19115 is about to be released. Giri is available to consult as needed. 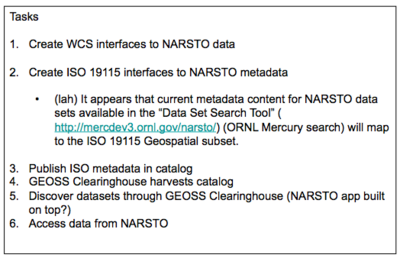 Here is another view of your diagram. We have been putting this process in the publish-find-bind triad. I can explain more of the details of metadata publishing through GEOSS and the discovery process if you are interested. 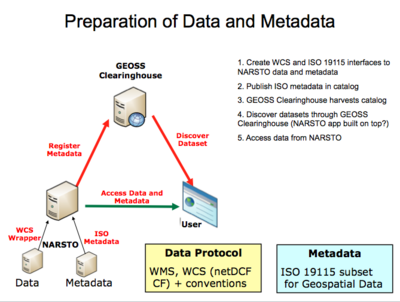 If you have any feedback we'd appreciate it, this is a working picture.

Thanks for the triad diagram and notes. The GEOSS registration process is becoming clearer. It appears to be similar to (or maybe just like) our Mercury metadata harvest, index, and search tools.

What are the required elements for the [ISO 19115 subset for Geospatial Data]? Example? File format?

We may have the capability to use our metadata editor to capture the required information, export, and map to the FGDC/ISO 19115 fields.

I was looking through the Mercury information this afternoon - pretty neat system and great news that it already allows an ISO export.

Attached is an example of our metadata record for Airnow, ISO 19115 has an xml schema, so the records in the catalog are xmls. Also attached is a table showing the AQ record (in development) that we use. Basically, we started with the ISO Core Elements and the OGC Core Queryable fields and have extended from there with a few additional fields specific to the AQ community catalog for community catalog distributor and WCS service description.

Could you send me an ISO 19115 exported from your system?

Attached is a mapping from the metadata document that you sent last week to the metadata fields in the ISO 19115 record for the AQ Community.

The metadata doc you sent was very helpful to see the structure of the NARSTO metadata. It had almost all of the information needed to create our community catalog records. There were two fields that I wasn't sure about: Spatial Representation type and topic category. These are highlighted in red text in the table.

The NARSTO metadata also included a lot of other good information that we aren't capturing yet. At the bottom of the table, I've suggested a way we could extend our metadata records to include things like project, instrument and temporal period that are included in the NARSTO record.

Let me know what you think of the mapping and then I can create the real record template for the NARSTO metadata.

The mapping that you have done and the extended items look good too.

I agree with your red highlighted choices. See below.

Next step? And can we assist with DES to NetCDF wrapper?

<<< For: Dataset topic category* Parameter Topic?, I like “environment” and ”CMA” too.

Retrieved from "https://wiki.esipfed.org/w/index.php?title=Talk:NARSTO_5min&oldid=25139"
This page was last edited on December 22, 2009, at 15:33.
Content is available under GNU Free Documentation License 1.2 unless otherwise noted.
Privacy policy
About Federation of Earth Science Information Partners
Disclaimers