A framework for data assimilation was prepared for the Hemispheric Transport of Air Pollutants (HTAP) working group in support of the Rong-Range Transport of Air Pollutants (LRTP) international protocol. The essence of the integration framework is that observations, emissions, and models of air pollutants need to be assessed and iteratively reconciled as a single entity that characterizes air pollution. For more detail on the framework see the workspace of the HTAP data system.

The data assimilation framework discussed below, also incorporates many of the concepts developed at WMO workshop:Chemical Data Assimilation for the Observation of the Earth's Atmosphere WMO GAW 169. The summary of that workshop is anotated and reproduced to aid the illustrations below. 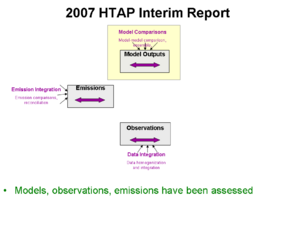 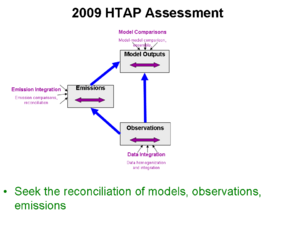 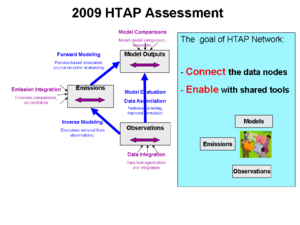 The 2007 Interim Report [1], the available HTAP-relevant global models, observations and emissions were assessed. The HTAP community has made particular contributions toward the intercomparison of global models.

The 2009 HTAP Assessment seeks to reconcile the models with observations and emissions.

This broader reconciliation will require the interaction of domain experts in all three areas, as well as the seamless flow of data among the participants. A network that facilitates human-human as well as computer-computer interaction is desired.

The main goal of the HTAP network is to facilitate the human and data connectivity. Given the connectivity, we wish to enable the participants with shared tools and methods. 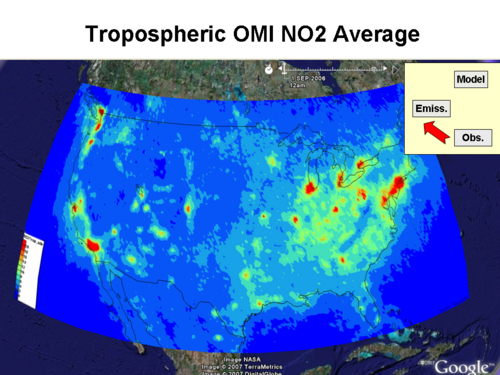 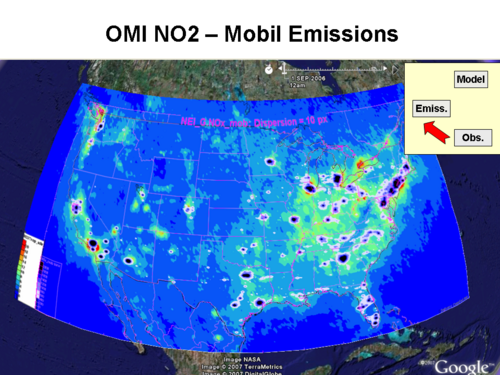 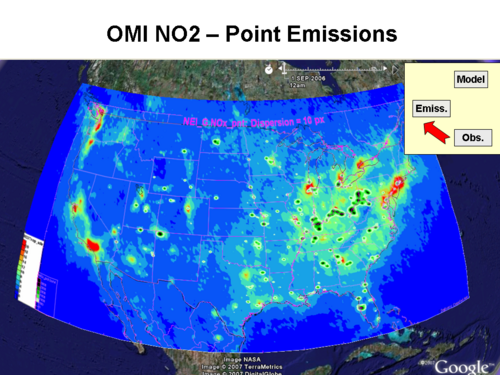 It is now possible to develop a chemical climatology (2004-7) of tropospheric NO2 based on routine daily satellite observations. The data show a highly patchy pattern over the Contiental US. Such data can aid the understanding of NO2 sources, atmospheric dynamics and potential impacts on human health and welfare.

Superposition of mobile emission sources on the climatotlogical OMI NO2 shows that most of the observed NO2 hotspots are indeed over metropolitan areas where automotive emissions of NOxare domiant.

A broader elevated tropospheric NO2 is observed over the Ohio River valley, where a string of power plants are responsible for significant NOx emissions. However, additional hotspots are also observed over known individual power plants in the western and southeastern US.

Point Sources over the Western US 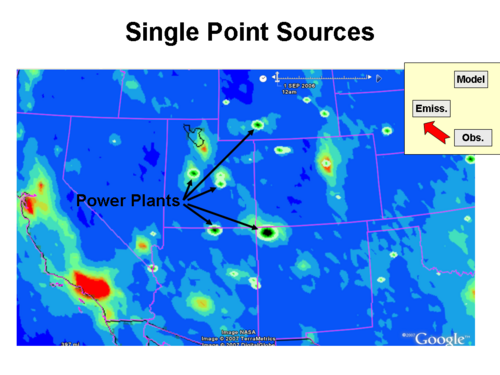 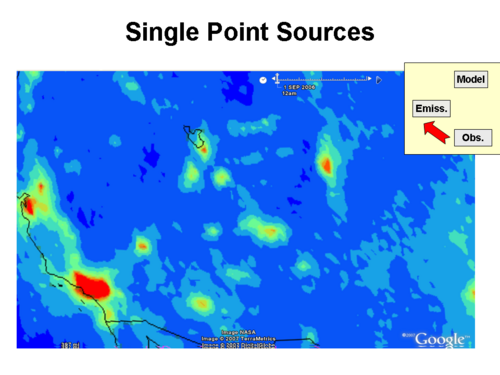 In the Western US, individual power plants, most notable the Four Corners plant, are clearly discernable by impact on their surroundings

Georgia and Idaho Smoke NO2 Emisssion 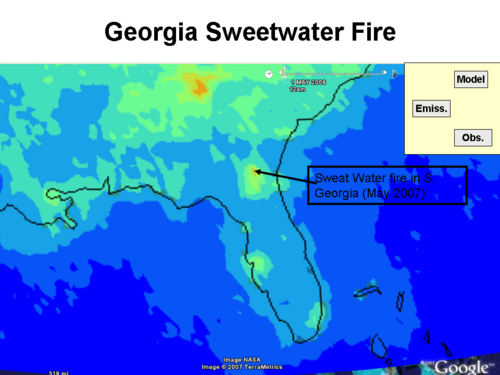 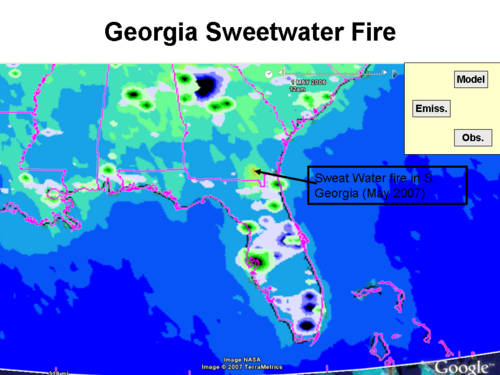 Non-industrial sources of NOx are also detectable in the OMI NO2 climatology. The impact of the S. Georgia fire in May 2007 is clearly quantifyable.

It is evident, that the fire emission can be spatially separated from the urban and power plant emissions. 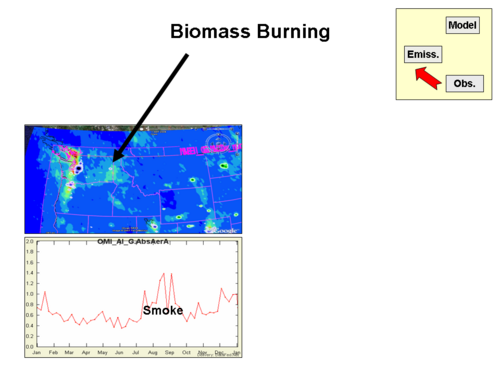 The regular biomass burning in the Northwestern US has also quantifiable impact on the tropospheric NO2. Such data can be evaluated to generate improved emission inventories for NOx. 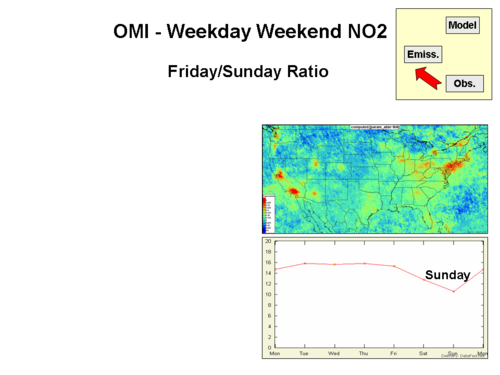 The daily time resolution of the OMI NO2 data allows the quantification of the weekday-weekend effect. For example, in large metropolitan areas, the Friday NO2 exceeds the Sunday values by a factor of 1.2-1.4. This again can aid the development of higher time resolution emission inventories for NOx. 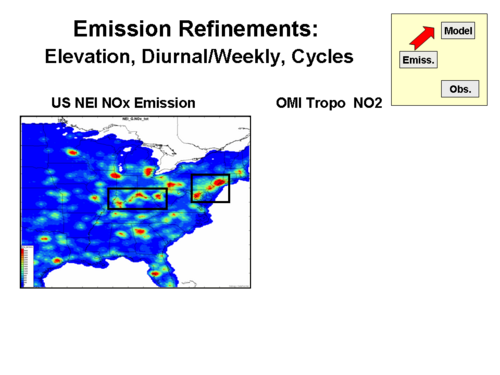 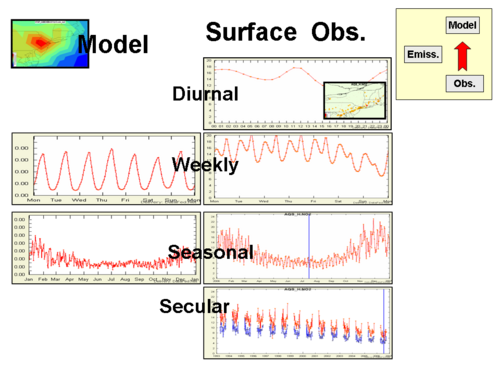 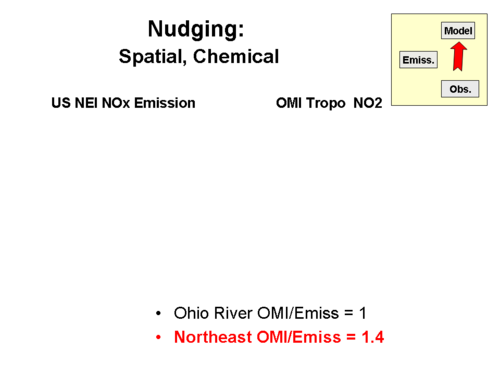 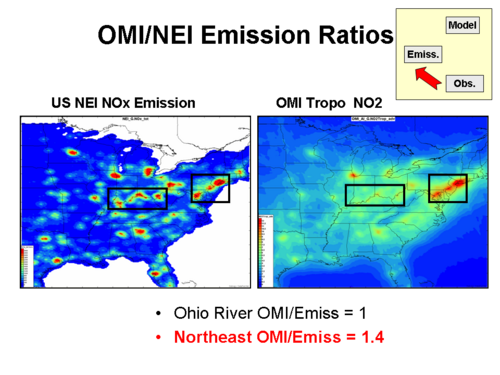 However, there are also significant questions to be explored.

Why is the OMI NO2/EPA Emission ratio 40% higher over the Eastern megalopolis than over the Ohio River Valley? 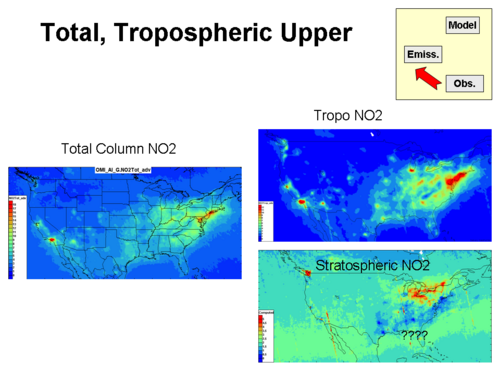 Also, why does the Stratospheric NO2 from OMI exhibit ‘NO2 holes’ over the major Easter cities in some of the months? Is the Total NO2 column split properly between the troposphere and stratosphere? 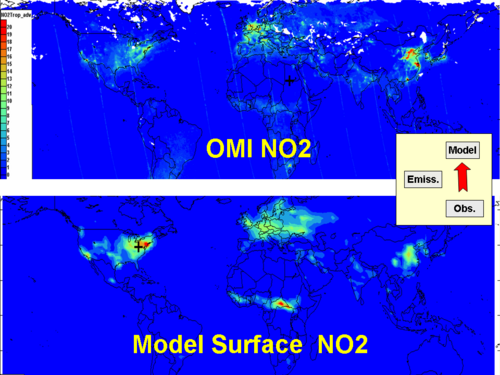 The available OMI NO2 data and the results of NO2 models will allow a global-scale comparison. This new opportunity will permit the global-scale reconciliation of the models-emissions and observations