GEO: Coordinates the construction of GEOSS by 2015[edit | edit source]

GEO is constructing GEOSS on the basis of a 10-Year Implementation Plan for the period 2005 to 2015. The Plan defines a vision statement for GEOSS, its purpose and scope, expected benefits, and the nine “Societal Benefit Areas” of disasters, health, energy, climate, water, weather, ecosystems, agriculture and biodiversity. The planned AirNOW International is directly relevant to disasters, health, climate and weather and it also has linkages to the other four SBAs.

The 10-Year implementation of GEOSS is guided by four Committees and one Working Group. The Committees are organized around the four Transverse Areas of user engagement, architecture, data management and capacity building, which cut across, and are relevant to, each of the issue-specific Social Benefit Areas. 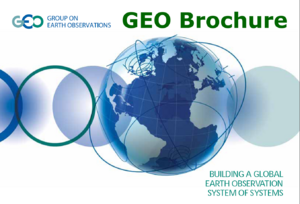 Global environmental change is placing enormous pressure on the Earth’s natural resources and on human society. It is altering the climate, multiplying disasters, degrading the oceans and forests, triggering new diseases and depleting supplies of food and freshwater. Preventing such dramatic consequences will require informed responses from governments, the private sector and civil society. To be effective, these responses must be grounded in comprehensive and timely information. The way we inform decision makers must change. More than ever before, decision makers, managers and experts must have access to the information they need, when they need it and in a format they can use. Today, vital information about our planet is being gathered by land, sea, air and space-based Earth observation systems. The problem is that the current process of collecting, storing, analyzing and distributing this information remains fragmented, incomplete or redundant. The world has an urgent need for a coordinated, comprehensive and sustained information system.

GEO was established in February 2005 after the World Summit on Sustainable Development, the Group of Eight leading industrialized countries (G8) and three ministerial Earth Observation Summits each called for improving observation systems. GEO is governed by a Plenary, takes decisions by consensus of its Members and is funded by voluntary contributions. The GEO Secretariat plays a lead role in coordinating the Global Earth Observation System of Systems effort.

GEO links together all existing Earth observation systems and organizations, allowing users to gain a complete picture of the planet. GEO ensures that Earth observation data and information remain universally accessible as a global public good. GEO builds trust and promotes multi-stakeholder collaboration on information gathering and dissemination; in this way, it encourages international cooperation on solving complex global problems. GEO is supporting individuals, institutions and governments eager to acquire the skills and technologies they need to use Earth observations more effectively. The implementation of GEOSS is being ensured by Members and Participating Organizations working together on specific programmes and activities under the guidance of four technical Committees. This coalition of countries and international organizations, collaborating under the auspices of GEO, has already transformed the ability of governments to manage their resources and promote the well-being of their citizens.

The Global Earth Observation System of Systems will provide decision-support tools to a wide variety of users. As with the Internet, GEOSS will be a global and flexible network of content providers allowing decision makers to access an extraordinary range of information at their desk. This ‘system of systems’ will proactively link together existing and planned observing systems around the world and support the development of new systems where gaps currently exist. It will promote common technical standards so that data from the thousands of different instruments can be combined into coherent data sets. The ‘GEOPortal’ offers a single Internet access point for users seeking data, imagery and analytical software packages relevant to all parts of the globe. It connects users to existing data bases and portals and provides reliable, up-to-date and user friendly information – vital for the work of decision makers, planners and emergency managers. For users with limited or no access to the Internet, similar information is available via the ‘GEONETCast’ network of telecommunication satellites.

Observing the Earth and monitoring its host of complex systems is a role no one organization masters. GEO is providing the structure and opportunity for governments and organizations to actively seek better solutions for our changing planet. GEOSS as an emerging public infrastructure could prove as essential to economic and social progress in the 21st century as new transport and communications systems were in the 20th. José Achache, GEO Secretariat Director