< Back to AQ Cluster

The ESIP Air Quality Cluster has recently initiated the development of software components of which purpose is to provide specific software support for data sharing and data usage. These include: a community catalog, community portal and metadata workspaces. These components are being developed to support the general air quality community, broad interagency participation, persistency and applicability to multiple air quality-related applications. The ESIP AQ Cluster contributes toward the three aspects of AIP-II :

Many of the Cluster’s participants will be contributing to the GEOSS AIP through their respective individual organizations and the Cluster’s GEOSS participation will complement those contributions with community-driven efforts. The Cluster is uniquely positioned to serve as an intermediary between the air quality community and GEOSS because of its established network of air quality scientists, managers and information technology expertise. The Cluster provides the neutral forum and environment to conduct the GEOSS air quality community activities that inherently require cross-organization coordination or a neutral entity to foster networking, such as providing human technical assistance in using and implementing the GEOSS standards. Because of its multi-organization participation and community-driven nature, the Air Quality Cluster is considering a role in the formation of a GEOSS Air Quality Community of Practice, per recommendation from Gary Foley, co-chair of the GEOSS User Interface Committee. Therefore, the Cluster is proposed as a forum during the AIP to align air quality scenario participation with the AIP objectives.

The AIP-II CFP emphasizes, "[d]o not assume a single participant development or demonstration; rather the developments will show how the various components can interoperate to produce results unique to coordinated activity of the participants." The alignment with SBAs is a community effort. Currently, only ad hoc, serendipitous coordination of various components occurs in order to produce targeted societal benefits; there is no formal method for the coordination, such as there is for the evolving Architecture through the GEOSS Architecture & Data Committee (ADC). The GEOSS User Interface Committee (UIC) Communities of Practice could provide a platform to coordinate efforts among AIP participant contributions providing structure and governance to the task of producing unique results to support the societal benefit area.

The ESIP Air Quality Cluster is uniquely positioned to serve as an Community of Practice intermediary between the air quality community and GEOSS committees because of its established network of key stakeholders which include users, i.e. the people who benefit from system, developers who construct the system, acquirers who contract and pay for the system, testers who evaluate system for suitability, sustainers who keep the system up to date, trainers who insure that the users know how to use it and researchers who provide the next generation of ideas[1]. Because of its multi-organization participation and community-driven nature, the Air Quality Cluster is considering a role in the formation of a GEOSS Air Quality Community of Practice, per recommendation from Gary Foley, co-chair of the GEOSS User Interface Committee.

An initial Societal Benefit Area Scenario for Air Quality was created during the CFP development phase [2]. One of the objectives for the AIP kick-off workshop Kickoff page is, "[t]o develop user scenarios suitable for directing development of Operational Exemplars." For the continued air quality scenario development, the ESIP Air Quality Cluster could offer a neutral forum and open environment to conduct the GEOSS air quality community activities that inherently require cross-organization coordination or a neutral entity to foster networking, such as providing human technical assistance in using and implementing the GEOSS standards. Furthermore, many of the Cluster’s participants will be contributing to the GEOSS AIP through their respective individual organizations and the Cluster’s GEOSS participation will complement those contributions with community-driven efforts.

The Cluster plans to work with the other AIP participants in the air quality scenario in three activities for the GEOSS Air Quality Community: Catalogs, Portal and Metadata workspaces. These components will allow the air quality community to more easily interface with GEOSS Common Infrastructure (GCI).

The GEOSS Common Infrastructure includes three GEOSS Portals for accessing environmental data. Community portals are envisioned to provide communities with a domain-specific interface to GEOSS. ESIP plans to create an air quality community portal based on previous work in developing an ESIP Portal and an air emissions portal (NEISGEI), both using the Open Source portal development of Liferay. The air quality community portal will incorporate semantic search features from the ESIP Portal and Web 2.0 collaboration features from the NIESGEI portal. The Cluster will coordinate with other AIP participants with experience in air quality portals with the objective to reuse the relevant features of all portals and to pursue interoperability across the portals.

The ESIP portal is a joint effort among ESIP, NASA, George Mason University (GMU) and many other ESIP members, such as Washington Univ. and Institute of Global Environmental Studies. It is a typical Geoportal or Spatial Web Portal for the Earth science community that provides interface for users to search, access, visualize and download the information needed. The ESIP Portal is targeted to not only share information at the levels of metadata, data, services, applications and knowledge but also avoid duplicated efforts, inconsistencies, delays, confusion, and wasted resources. The ESIP portal is developed based-on SOA and Liferay, an open source software platform, and uses Java Servlet Technology and Ajax (asynchronous JavaScript and XML). A semantic search portlet bridges different catalogs for sharing cross information and refining search results based on the NOESIS tool developed by University of Alabama at Huntsville and integration with interoperable standardized interface. A time-enabled OGC WMS viewer portlet and a 3D/4D visualization portlet, based on NASA World Wind, are available for inclusion in the air quality community portal.

The NEISGEI portal (www.neisgei.org) has been developed through support from EPA and NASA and is targeted at the air emissions community. It serves as a metadata aggregator for air pollutant emissions inventory datasets, data analyses, publications, and web tools. Metadata records entered in the portal with an associated URL and keyword tags are automatically registered with delicious using the delicious API. Analyses conducted through some web applications are saved as metadata records in the portal, including information about the tool used, its analysis setting, and datasets involved. By creating a metadata record in the portal for the analysis, others can 'jump' back to the tool to view or modify the analysis or use the portal to comment on the analysis. RSS is used as a mechanism to share content between the portal and other web sites. For example, the ESIP air quality metadata workspace entries are exposed through RSS and therefore accessible and viewable from within the portal. We plan to work with the GEOSS AIP air quality group to identify the appropriate features in NEISGEI to reuse in the air quality community portal.

An important characteristic of the community portals is their interoperability with other community portals and the GEOSS portals. We plan to pursue options in the exchange of information between portals involved in the GEOSS AIP. Some options include the standards RSS, Web Services for Remote Portals (WSRP), and Java Portlet Specifications (JSR-168 and JSR-286).

Metadata workspaces are hybrid structured and unstructured wiki pages dedicated to registered datasets and services. Currently, only dataset metadata workspaces, DataSpaces, have been created but it is expected that there will be metadata workspaces of a similar form created for processing services. DataSpaces include structured dataset descriptions, data lineage, and data quality information such as provider, parameters, platform and time period. These workspaces are also designed to harvest unstructured user-contributed contextual metadata relevant to a dataset, such as publications referencing the dataset or web applications using the dataset, and connect data providers, mediators and users (shown by dotted blue lines in Fig. 1). We would like to encourage air quality scenario participants to use the metadata workspaces throughout the Pilot to explore its utility in supporting individual and group SBA efforts. 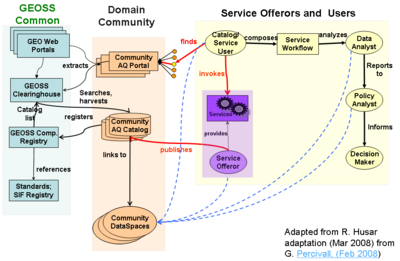 The Air Quality Cluster has formed over the past 3 years to build connections among air quality data providers and data users. The AQ Cluster brings people and ideas together to facilitate technologies and IT architecture for improving the flow of earth science data to air quality management. Active participants in the Cluster include university air quality researchers, government air quality managers and decision makers, information science and technology experts, and air quality data tools developers. The broad range of information users, create a user-driven space for describing, documenting, and providing feedback about the many datasets and tools for adding values to data, and provide a forum for individual projects interested in using and/or sharing services. As a result, the work of the Cluster promotes contributions to the creation of the Global Earth Observation System of Systems (GEOSS). Recent activities of the Cluster include co-organizing, with EPA and NASA, an NO2 Data Synthesis Workshop, hosting a collaborative wiki to support an EPA Air Quality Data Summit and follow-on efforts, and helping draft the Air Quality Scenario for the GEOSS Architecture Implementation Pilot.

The diverse multi-organization participation of the Cluster and its associated expertise also allow it to bridge the activities of the GEOSS Architecture Data Committee (ADC) and the GEOSS User Interface Committee (UIC), which have had only limited coordination to this point. The ADC is coordinating the GEOSS AI Pilot while the UIC addresses issues in meeting community user requirements for GEOSS. The creation of air quality community components in the GEOSS AI Pilot will involve coordination with both the ADC and UIC.