Established metadata terminology is the result of a multi-decade, cooperative effort between metadata experts in NOAA, NASA and other U.S. Federal Agencies. The selection below is intended to provide a framework of basic terminology in order to facilitate understanding of fundamental concepts. More in-depth information and application examples are available in Habermann, 2014.

More often than not, the scientific process is documented, stored, and circulated using different tools and approaches depending on the needs of an exclusive group within the scientific community. This customized, often unstructured approach may work well for independent investigators or in the confines of a particular community; but for users outside of these small groups, it creates significant complications with discovering, accessing, using, and understanding (Space keeper - link to Metadata Recommendations – Background) for an explanation of these 4 processes) the data. 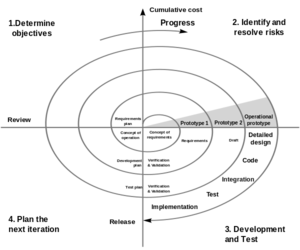 Visual Depiction of the Spiral Model

Spiral Model: Like any language, metadata dialects are living entities that must evolve and expand in response to newly developed requirements within user communities. This constantly escalating effort inherently introduces increasing levels of complexity. To promote progress and metadata improvement, a Spiral model that utilizes small, actionable iterations is employed. Following this model, communities are able to improve their metadata over time.

The metadata improvement process is divided into a series of steps that can be defined and accomplished in a clear and orderly manner.

Each loop in the spiral represents a concept that is divided into 4 quadrants consisting of:

There is no limit to the # of loops that can be added.

Use of a Rubric is one method to assess the completeness of a spiral.

As discussed above, the metadata improvement process is orchestrated through a series of spirals. In order to measure progress toward improvement goals and characterize the task to be done, the state of the metadata record in the improvement process (spiral) must be quantitatively and consistently evaluated. Once a set of spirals for a particular dialect are defined, this can be accomplished through use of a rubric. The rubric provides a description of the state of a record by arranging the spirals as rows in a table with degree of completeness shown as columns. As the record becomes more complete, the rubric score increases.

Historically, metadata content has been approached in a variety of ways depending on the needs of specific user communities. This resulted in the development of multiple metadata “dialects” that must evolve and improve as metadata needs change. The metadata improvement process is defined and depicted using spirals and the success of the spirals are quantitatively and consistently evaluated using rubrics. Recommendations are the conclusion to this evaluation process. They are the metadata elements that are required, recommended, or suggested for a particular community need. Publishing this information in the form of recommendation lists eliminates the need to “reinvent the wheel” and therefore facilitates maximum output for minimum effort. Along those same lines, it should also be noted that recommendations are a subset of a given dialect’s capabilities necessary to satisfy the specific needs of a particular user community. By employing only what is necessary to accomplish the task at hand – time, effort, and energy are significantly conserved.

Retrieved from "https://wiki.esipfed.org/w/index.php?title=Documentation_Terminology&oldid=62400"
Category:
This page was last edited on September 16, 2017, at 16:07.
Content is available under GNU Free Documentation License 1.2 unless otherwise noted.
Privacy policy
About Federation of Earth Science Information Partners
Disclaimers