In this exercise I have attempted to simulate the aerosol reflectance, as observed by Terra MODIS, through Mie computations of selected aerosol models. The case I have considered here is that of a plume of dust that swept over the South Pacific Ocean from Australia on October 13, 2009. Figure 1. Shows the true-color image of the dust storm at 10:40 a.m., local time, on October 13 (23:40 UTC on October 12).

Where, SolZ, SolA, SenZ and SenA were solar zenith, solar azimuth, sensor zenith, and sensor azimuth respectively. No Rayleigh correction was carried out on MODIS data for this exercise. Also, reflectance values of pixels were not normalised based on the scattering angles. The spectral sub-setting of MODIS data was carried out in ENVI. Band1 (0.645µm), Band2(0.8585 µm),Band 3(0.469 µm),Band 4(0.555 µm), Band 5( 1.24 µm),Band 6(1.64 µm) and Band 7(2.13 µm) were selected for establishing spectral signature of aerosols (these are the same bands used in the original MODIS aerosol algorithm). Figure 1 also shows the change in spectral reflectance over water in presence of aerosols, for a selected pixel. The water surface reflectance was assumed to be non variant spatially and with view geometry. I have considered the reflectance only over ocean as the land retrievals are to be dealt in a much detailed manner. As a start, mie computations were carried out for about 24 aerosol models. As this was a clear case of a dust storm, I selected the models that some what represent the characteristics of dust aerosols. The details are given in Table 1 (excel sheet).

Table 1: Mie Computation Results. MieTab version 7.24 was used for these computations. Not much success was achieved in simulating the observed reflectance with these models (May be further models need to be tried. Please advice whether the methodology i am following is correct??! I couldn’t find a mie program which will allow me to interactively select the aerosol models similar to CAPITA’s interactive graphics capabilities). Figure 2 shows the spectral reflectance as observed by MODIS and the closest matching reflectance simulated by one of the aerosol models (Model 23) used. 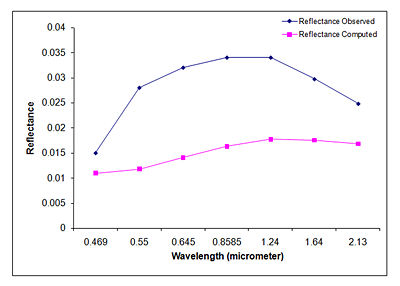 Retrieved from "https://wiki.esipfed.org/w/index.php?title=2010-05-30:_MODIS_aerosol_reflectance_Mie_simulation&oldid=27109"
This page was last edited on May 29, 2010, at 22:56.
Content is available under GNU Free Documentation License 1.2 unless otherwise noted.
Privacy policy
About Federation of Earth Science Information Partners
Disclaimers